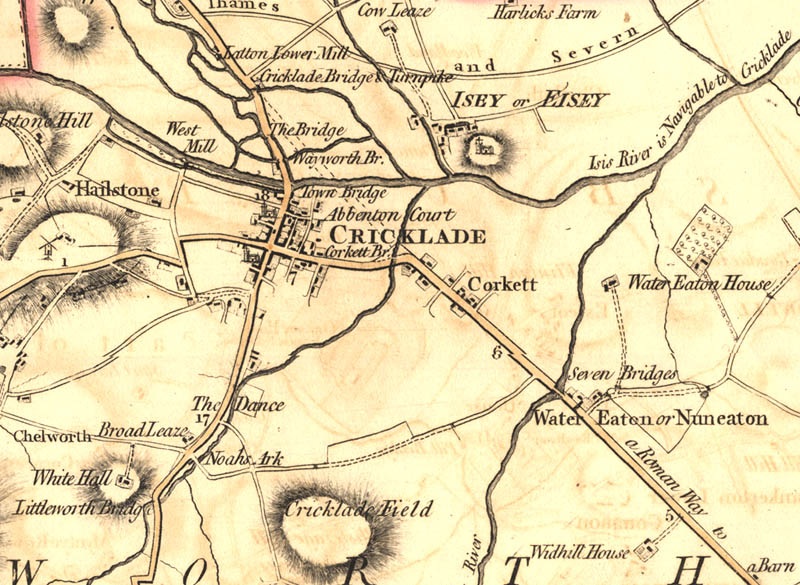 Cricklade is midway between Cirencester and Swindon, just off the A419 and is the northernmost town in Wiltshire. The site was occupied by the Romans who diverted Ermin Street along a causeway to cross the floodplain of the upper river Thames.

In the ninth century the West Saxons built a fortified new-town to defend Wessex against Danish attack, and its layout can still be traced today. Its two parish churches, St. Mary’s and St. Sampson’s, were rebuilt by the Normans, and the 13th century Priory is now a private dwelling. Henry II granted a charter to the town, where his mother, the empress Matilda, was sheltered during the Anarchy.

From 1275 to 1885 the town had two MPs, and in the 18th century it gained notoriety for bribery and corruption at elections. Barges navigated the River Thames up to Cricklade until early in the 19th century. North Meadow, an ancient Lammas water-meadow and now a nature reserve, is the natural habitat of the rare Snakeshead Fritillary.

There are several hotels, inns and restaurants, and the town makes an excellent base from which to explore the river Thames and the surrounding countryside. The Museum is located on right hand side of Calcutt Street as you the approach the town from the A419. 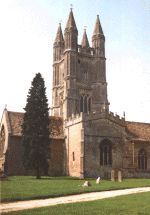 Cricklade St. Sampson’s Church The massive tower of the parish church with its four tall rounded turrets dominates Cricklade and is a landmark for miles around. There has been a stone church here since the foundation of the borough about 890AD when it was given by Edward the Confessor to his favourite, Robert FitzWimarc. Dedicated to St. Sampson, who founded the Abbey-Bishopric of Dol in Brittany, it is one of only five named after him. At the time of the Domesday survey it was held by St. Peter’s Westminster.

Most of the present church was built between 1240 and 1280 but some traces of much earlier work remain. A major restoration took place in 1864 and the oak pews described as being of “all shapes and sizes and facing all manner of ways” were replaced. The tower is reputed to have been built by the Duke of Northumberland, father-in-law of Lady Jane Grey, between 1551 and 1553; shortly afterwards he was beheaded.

The entrance to North Meadow is off the Causeway, to the north of the Town, approaching the A419. North Meadow was designated a National Nature Reserve in 1973 and is largely owned by the Nature Conservancy Council. An ancient flood meadow of some 100 acres it lies between the rivers Thames and Churn and is famous for being the best habitat for the Snakeshead Fritillary (frittilleria melagris) in the country. The pretty purple bell shaped flowers are at their best in early May and many visitors come to see them; picking is strictly forbidden.

The continued existence of the fritillaries is largely due to the ancient system of land tenure still practised. The meadow is Lammas land – land where the common rights change on Lammas Day. From August 12th to February 12th, commoners can graze cattle and horses but in the spring and summer the hay crop is taken by the owners of the land. No artificial fertilisers are used and there is a huge variety of plants and seeds in the pastures. The upright stones here and there, some with initials on, mark the boundaries of ownership.

The meadow is still managed through an ancient Court Leet, a kind of manorial court, which appoints a Hayward whose duty it is to supervise the grazing and upkeep of the meadow and collect fees due.

Cricklade Museum is operated by Cricklade Historical Society, with curatorial help from the Wiltshire Museum Service. The original Museum opened in 1950 in the old weighbridge next to the town hall. It moved to its present location, a former Baptist Chapel on Calcutt Street, in 1985 when the building was acquired by Cricklade Town Council.

The collection represents the town’s social history from Roman to modern times, and includes a large number of maps, photographs, and archives. Interior Local artefacts range from the tusk of a woolly mammoth to machinery used to manufacture gloves.

CharterThe Charter granted by Henry II in 1155 commanded that.…..

“THE MEN OF CRICKLADE BE QUIT OF TOLL AND PASSAGE-MONEY AND OF ALL OTHER CUSTOMS, THEY AND ALL THEIR GOODS, WHERESOEVER THEY SHALL GO THROUGHOUT MY WHOLE KINGDOM.
AND I FORBID ANYONE MOLESTING THEM
OR THEIR PROPERTY UNDER PENALTY OF TEN POUNDS.”

This right was renewed by successive monarchs up to James I.

The Museum is open throughout the year on Saturdays 10am to 12am, on Wednesdays 2pm to 4pm, and at other times by appointment with the Hon. Curator – telephone 01793.750756. Admission charges are 20p for children and senior citizens, and 30p for adults.