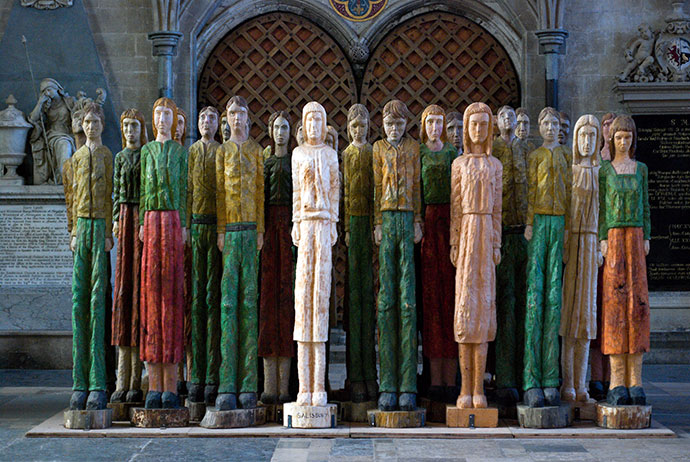 The story begins at a place called Old Sarum, two miles north of modern Salisbury. It was known to be an Iron Age earthwork and later became a Roman fort. In Saxon times was an important political centre, a Witenagemot being held there in 960 AD. In 1070, William the Conqueror reviewed his troops there and it became a Bishopric with a Cathedral and a Castle.

The first Cathedral was mostly destroyed within days of its consecration by a huge storm. Only the nave survived to be incorporated into Bishop Roger’s restoration. Osmund, a powerful Bishop and Chancellor of England, completed the rebuilding and established the Constitution based on the Chapter of the Bayeux Cathedral in France.
In 1220 the authorities decided to abandon the site after problems arose between the military and the clergy.

The old Cathedral fell into ruin and many of its stones were used to build a new Cathedral in Salisbury. Situated at the confluence of four rivers, Salisbury is the only city within the county of Wiltshire.

The Cathedral hosts the tallest spire in England at 404 feet and it dominates the city. Many legends grew from the choice of the site to build the Cathedral; some say that the flight of an arrow shot by an archer from the ramparts of Old Sarum marked the place, another that the Virgin Mary appeared to Bishop Poore in a dream telling him to build in ‘Mary’s Field’ which was the site selected, even though is was low-lying and marshy.

Salisbury is one of the few Cathedrals built in the shape of a double cross with the arms of the transept branching off on either side. The cloisters are larger and older than any other of the English cathedrals.

The spire was added 100 years after its concecration and its immense weight, some 6000 tons, meant much strengthening. The Cathedral is home to a wealth of history and many unique treasures including an ancient clock mechanism dating from 1386 and said to be the oldest piece of machinery still at work in Britain, if not the entire world.